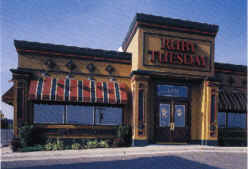 The Ruby Tuesday Restaurant of Branson Missouri designed five feet by five feet glass windows to bring light, views and an outdoor ambiance to the restaurant. However, intense glare, heat and reflections off parked automobiles made dining uncomfortable and, at times next to impossible.

Fabric shades were installed but darkened the dining area and were a constant source of problems to the staff, who had to raise and lower them according to the position of the sun and the requests of the customers.

Vista Window Film is a laminate of polyester and metallized coatings. The film is constructed with an exclusive, clear, distortion free adhesive system and a special scratch-free coating that allows for easy maintenance. The specific film selected was Vista Dayview, a neutral film that when installed is virtually invisible from both sides of the window. The film carries a ten year warranty for materials and labor.
Vista cut the glare and heat to the point that dining was truly in a comfortable and trouble-free environment without shades. Furthermore, the Vista film eliminated 99% of harmful ultraviolet radiation thereby helping to protect the restaurant interior from fading.

When the filming was completed, Mr. O’Connell said, “Our customers, who could not detect the Vista Window Film, asked what we had done to create such a light and cheery interior. I explained that we just entered the twenty-first century and added hi-tech solar control window film throughout.”

NOW HIRING!
Looking for a tinter to handle automotive clients 3-5 days/wk. Likely lead into full-time depending on job performance. We can train the right person with limited experience, must have some experience.
Applicant must be reliable, trustworthy, and interested in working. We offer paid holiday/vacation in addition to competitive per tint job compensation.